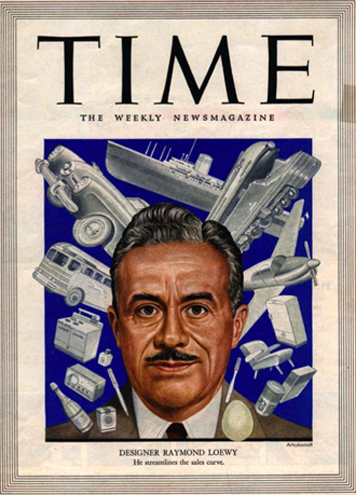 Today we want to analyze this beautiful article written by Eric Feigenbaum speaking of Raymond Loewy, defined by many as the father of industrial design.

Raymond Loewy was a major French industrial designer mainly active in the United States from the beginning until the middle of 900. During his career he has designed almost everything from lipsticks to locomotives. Part of its portfolio are the Coca Cola’s bottle, the model Champion from the automaker Studebaker, the Greyhound, the logos for the United States Postal Service, Shell oil company and Lucky Strike cigarettes … he even designed the interiors of the Skylab, the NASA’s orbiting laboratory.

Before his illustrious career as an industrial designer he had a brief stint as a freelance window dresser in the famous store chain Macy’s, and it is on this experience that, given our industry, we want to focus.

One day, during the period in Macy’s, he dressed a mannequin with a nightgown, put it on display with 2 spotlights focused and the next day he left his job just before being fired. Why? In the days before vendors had tried to dress the mannequin with any available clothing but the response of Raymond was always the same: no. He perfectly knew that day his dummy was not to be put on show for the purpose of simply selling a robe but rather to project Macy’s brand out of the window, on the road, to engage passersby and capture their attention to look at the window. Loewy said, “Simplicity is the determining factor in the aesthetic equation”.

Loewy talks about the importance of the mannequins on 2 different levels:

Finally we use two words spoken by the same Loewy: Visual Retention. This should be the inherent purpose of any mannequin. The mannequin in the window must somehow be the materialization of the brand itself and to obtain this should be easily recognizable and well associated to our brand.